Motherhood's big secret, and why we need to talk about it. 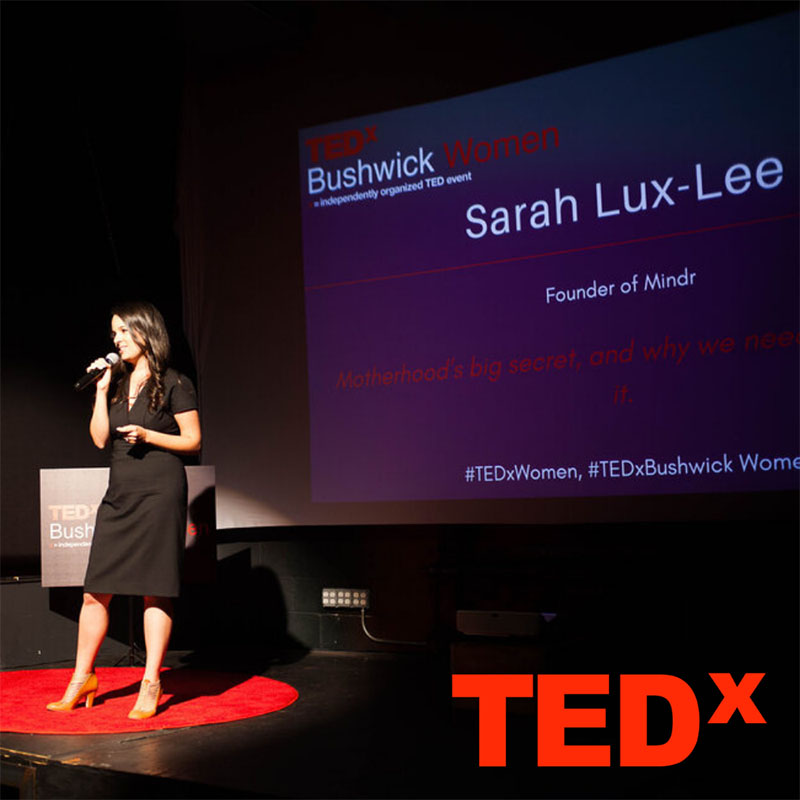 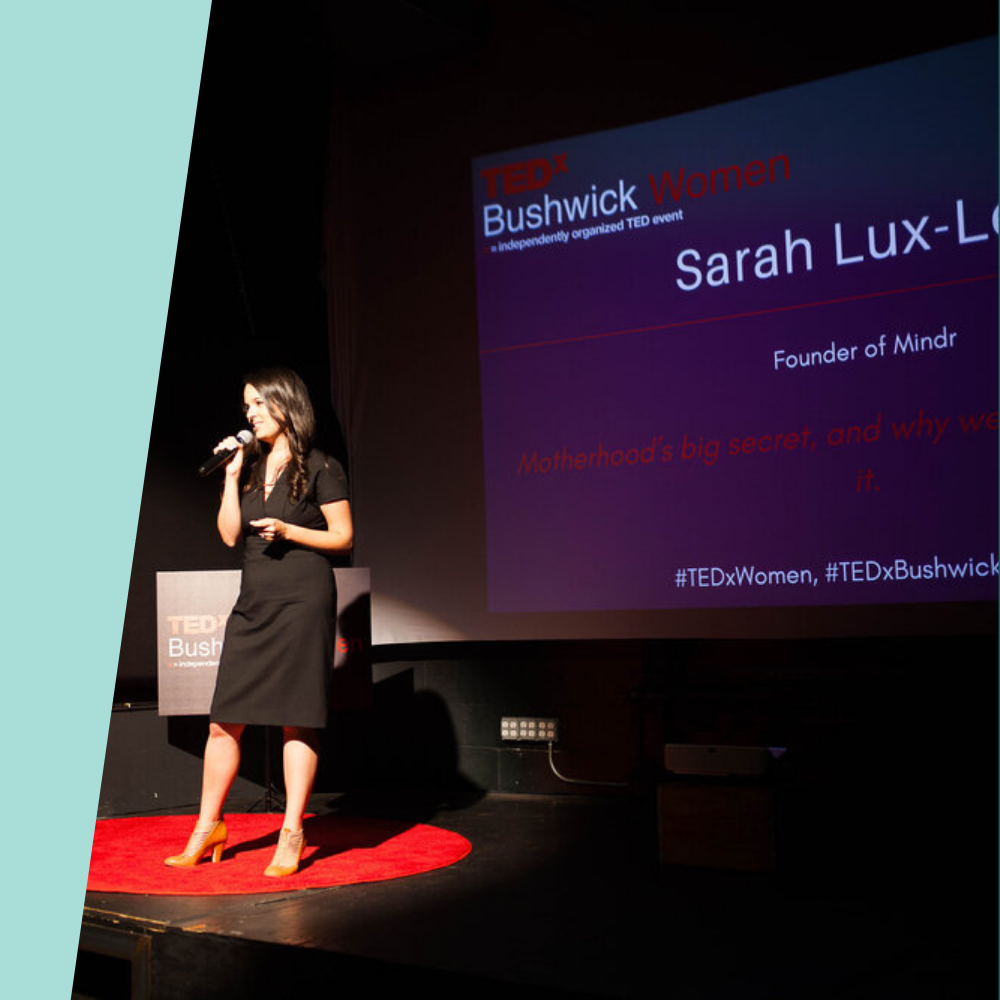 This is the text of a TEDx talk by Sarah Lux-Lee on Friday, November 17th, 2017 at TEDx Bushwick Women.

‍On a sunny day in May last year, I put on a powder blue graduation gown, placed the cap on my head, and stepped into a sea of fellow graduates. We were celebrating the completion of our public policy Masters at Columbia University. The air was electric. We were excited, our families were excited, and our Professors were so proud of everything we’d achieved and learned, and what that learning would mean for our future. It was a really magical day.

When I got home that night, I put away my cap and my gown, and patted the baby bump that had been hiding underneath it. You see, I was 34 weeks pregnant that day - my daughter Ella would be born six weeks later.

That day felt like a pivot point. I was closing the door on a time of learning, stimulation and growth, and opening a new door to a time of love, warmth, and deep connection.

Or at least that’s what I thought at the time.

Turns out, that’s what a lot of people think is the trade-off that women make when they have a baby.

A Princeton study found that when a female professional has a child, she is perceived as a little warmer and friendlier, but a lot less competent than she was before.

Let that sink in. Just the fact that a woman has a child is enough to make her colleagues think she is nicer, but less intelligent, than before.

This perception that mothers are warmer but less competent than other people isn’t just offensive. It's also having a very real impact on women's bottom line. The pay gap between mothers and non-mothers is even larger than the gap between women and men. Mothers lose about 7% of their earning ability for every child. We are offered about $11,000 less for a starting salary than identically qualified people without children. We are paid about 71 cents for every dollar paid to fathers, who by the way, are also parents. We are less likely to be hired. And when we do get hired, we are more likely to be passed over for promotion, and less investment is made in our training.

This is holding women back, and it's keeping women down. 2.7 million American families with a working mother live in poverty. 2.1 million of them are mother-only families. The motherhood penalty is something we can’t afford to ignore, not here in the US, and not in the many other countries where this phenomenon exists, from the UK to Australia to Japan.

One of the justifications often given for the motherhood penalty is that all this baby-making and rearing takes away time that a woman would otherwise be investing in her skills and experience. The formal name for this is “human capital theory.” I prefer to use the colloquial term, “hypocritical nonsense.” And here’s why.

For starters, the experience of having and raising a child is a vibrant training ground for skills and expertise that every employee needs. So while some people say “motherhood is the hardest job,” I would argue it’s one of the most powerful boot-camps for any job.

Tell me who has more resilience and grit than a mother who has rocked a screaming, colicky baby through the night, after months of sleeping no more than two hours at a time, and then gets up in the morning with a spring in her step because that’s what mothers do.

Tell me who knows more diplomacy and tact than a mother who has to sit down with a young child to explain racism, or homophobia, or extremism, and still have that child walk away feeling safe, and supported, and like they can truly achieve anything they set their mind to.

Tell me who is more resourceful than a mother feeding hungry mouths and facing the endless churn of childcare costs, while losing 7% of her earning ability for each child.

"In short, motherhood makes us ninjas. And ninjas are an asset in any workplace."

‍US Supreme Court Justice Ruth Bader Ginsburg recently wrote that her career success happened not despite, but because of, being a mother. Law and motherhood, she said, each provided her a respite from the other. They gave her a fresh perspective, and a sense of proportion that many of her colleagues lacked.  And she isn’t alone in crediting motherhood with part of her success – a recent study by the Federal Reserve found that over the course of a 30-year career, women with children are more productive than other workers in nearly every career phase. Sure, there might be a temporary dip, like when your toddler just learned that snails are a fun thing to eat and is vomiting everywhere while demanding an explanation of how rocketships work, but overall, the evidence is in and motherhood makes you better, not worse, at work.

So that’s why the motherhood penalty is misguided. Let's talk about why it’s hypocritical.

Despite the sleep deprivation and the distractions, for many mothers having a baby is a time of renewed creativity, a desire to learn, and an entrepreneurial spirit. Harvard researchers have explained that this is in part a result of a heightened sense of altruism among new mothers, a desire to connect with others and give back to their community during this transformational time in their lives.

But when new mothers look out into the world for a place to channel all this creative energy, they find they’re not welcome.

For one thing, as a society we’ve conditioned ourselves to see breastfeeding and breast pumping as distasteful, or in the words of some our leaders, disgusting. We judge women for breastfeeding, in the same breath as telling them that breastfeeding defines their success as a mother. We want them to do it, but somewhere hidden away, where we don’t have to see it or think about it.

Another thing we don’t like is noise. Not the cheerful, raucous kind that toddlers make when they’ve discovered something new, not the scared and questioning kind that a newborn makes in new surroundings, and not the kind that a mother makes when she's making everything better. We find it distracting, we find it inappropriate, and we think it should stay at home. We let 20 million college students distract themselves and each other with smartphones and laptops in classrooms across America, but one small child in a place of learning? Well that's a deal-breaker.

We expect new mothers to be unseen and unheard. They definitely shouldn’t be in our libraries, or our classrooms, or our public lectures. If they congregate at all, it should be somewhere far away from us, on a multicolored mat, where they can sing about animals and talk about diapers like they’re meant to. And when they return to work, they’d better come back without any hint of this life-changing experience they’ve just had, or the tiny human that now defines them. We shun new mothers. We deny them entry. And then we charge them a motherhood penalty for not using this time to the fullest.

So I come to you today with one important idea worth spreading.

It’s that mothers have creativity, curiosity, compassion and capability that, if tapped, would unleash a torrent of intellectual capital, driving our societies and economies forward. But only if we figure out how to harness it.

"Mothers have creativity, curiosity, compassion and capability that, if tapped, would unleash a torrent of intellectual capital, driving our societies and economies forward."

Well, it starts with welcoming new mothers into our public spaces, our social spaces, our intellectual spaces, and our civic spaces.

It starts with changing tables in restrooms, and ramps for strollers.

If you’re an employer, you probably already know where it starts. You know about flexible hours, and paid parental leave, and evaluating the quality of work rather than face time. You know about having a mother’s room for pumping, and considering the needs of all parents and care-givers so we can all share the caregiving load. But you might not know you need to do these things not just because it’s right, and not just because it’s important to the mother, but because it is the only way you get to tap into this powerful workforce, which has been shown to outperform any other. In a millennial market, where employers are constantly chasing after their people, to generate loyalty, to create buy-in, to make them stay, this is too big an opportunity for you to miss.

For all of us, it starts with increasing our tolerance for a little noise. In our cafes, in our classrooms, and even in our boardrooms. Because there will come a moment for every mother where her childcare solution fails, and she is faced with a choice: between an opportunity for her growth and advancement, or being there for her kid. It starts with not making her choose.

Some of you are sitting here feeling skeptical. You’re thinking, you can’t have a baby in a boardroom, that’s ridiculous. You’re thinking, new moms have enough going on already, they don’t have the energy to think about intellectual or professional or civic or social opportunities. So I’m going to tell you about a little experiment.

It’s an experiment that started in Brooklyn, shortly after that graduation day I told you about. My daughter Ella was three months old, and it was the time of the Federal Election. There was an odd energy in the air, in the playrooms and at the parks. We were all still singing about animals and talking about diapers like we were supposed to, but there was an undercurrent. A little fear, some uncertainty, a lot of thoughts about how the debates were progressing and what the outcome might be, and a desire to become more involved, to contribute. So I booked out my favorite local café, and brought in a renowned political science Professor from Columbia, and we had a talk. Much like this one, but with 40 new parents in the room, and 40 babies. And believe me, there was noise. And there was breastfeeding. But there was also a vibrant political discussion, facilitated by a global expert, and everyone walked away a little wiser, and better supported, and a lot more civically engaged.

Since then, the experiment has grown into an organization called Mindr. We run talks, workshops, classes and events led by global experts, where crying babies are always welcome. We’ve held talks on entrepreneurship, teaching people how to take an idea and turn it into a viable business. We’ve had climate change discussions, and design workshops, and reflections on the future of feminism, all with babies in the room. We recently took a delegation of 10 Mindr moms to a conference by the United Nations, to contribute their thoughts on how we can harness female innovation. And we worked with the organizers of that conference to create a safe, clean and pleasant place for those women to pump.

There’s a radical change going on right now, in the way new mothers see ourselves and what we can do. We are reclaiming and reshaping our identity during this important moment in our lives. And we are saying hey, you know what? Maybe becoming a mother did make me warmer. But you can bet it also made me more competent.

So now you know the secret: motherhood is not a penalty, but an asset. To the individual, to the economy, and to society.

The question is – what are you going to do about it?